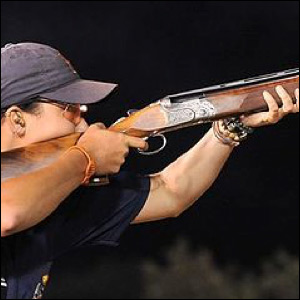 Desi began shooting at the age of 14 in Anchorage, Alaska through the local Fish & Game program. A good friend had mentioned to her that she wanted to try a weekly 5-stand league to learn how to shoot a shotgun, and that is where Desi got hooked. Over the next several years, with her parents’ support, she began to shoot more leagues and weekend tournaments at her home club, Grouse Ridge, in Wasilla, Alaska. Grouse Ridge’s owner Harry Brunnhoelzl Sr. took her under his wing and gave Desi her first shooting lessons.

She shot her first Nationals in 2004 and first US Open in 2005. These were the beginnings of many more years of travel for sporting tournaments. When she graduated high school in 2008 she decided to move to California where she worked at Triple B Clays and began her college career at Golden West Community College. Four years later, she and her boyfriend Zach Kienbaum decided that a move to Houston, Texas would not only benefit both of them financially but could boost their shooting careers to an all-new high. And so it did. Since the move to Houston in 2012, she has shot more competitive targets in the last two years than all previous years combined.