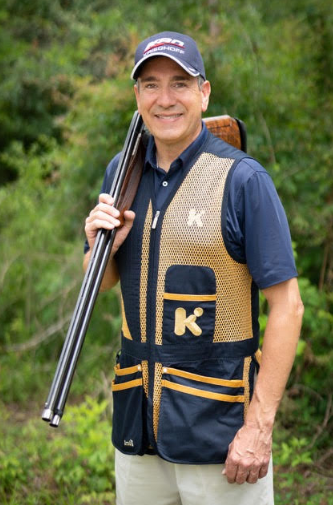 Dr. Cesar Aristeiguieta is a board-certified emergency physician and an avid competitive shooter and outdoorsman. The son of an antique gun collector, Cesar developed an appreciation for firearms early in life. Cesar’s lifelong passion for shooting began at the family farm at age 12. He is a lifetime member of the National Rifle Association (NRA.)

Prior to medical school, "Dr. Cesar," as his patients know him, served as a California police officer. He received the "Top Gun" award as the leading graduate, and top shooter, of his police academy class. During his law enforcement career, Cesar also received several recognitions for marksmanship with his service pistol and shotgun. He continues to refine his pistol, rifle, and tactical shotgun skills through International Defensive Pistol Association (IDPA) and three-gun matches.

Cesar began shooting sporting clays in 2014 after relocating to Texas. He is a Lifetime Member of the National Sporting Clays Association (NSCA) and has shot over 26,000 life-time registered targets. As a sporting clays competitor, Cesar was selected to the Texas All-State Team in 2018. That year he also finished 6th in the South Central Region, and 3rd in the nation in his class points race. In addition to being a very active competitor, Cesar is also an NSCA Certified Referee. In 2019, Cesar was elected to a two-year term on the Texas Sporting Clays Association Board (TSCA.) He is also an NSCA Certified Level I instructor and enjoys introducing beginner and youth shooters to the sport.