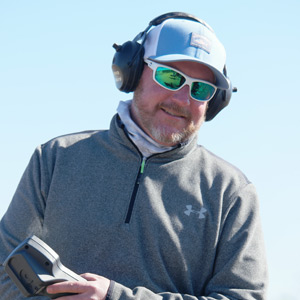 Don’t know what you were doing back in 1990 but Brian Ash, at age 10, was traveling with Vicki and Gil Ash around the country competing in sporting clays. Brian was a multi-year All American and winner of many sub-junior titles. He competed for 4 years until his interest turned to other things like fishing, hunting, and school. He began working at American Shooting Centers. He got his feet wet setting targets there at ASC and eventually set targets at many national and world events all over the country. While his passion was target setting, he has always been passionate about shooting sporting clays and birds. It was only natural for Brian to join Vicki and Gil at OSP Shooting School in 2014.

Brian brings a depth of knowledge to OSP from the standpoint of target reading and helping shooters understand what the target setter is trying to do to them, and he continues to be amazed at how the OSP system of shooting virtually eliminates the target setter from the equation. Brian also assists ranges across the country in Gun Club Management and course design as a consultant to Florida Fish and Wildlife Service, Georgia DNR, Texas Parks and Wildlife and other ranges in Alabama, Montana, and Oklahoma.

Brian has been training with the OSP system of shooting since 2014 and has conducted clinics in Colorado, Montana, California, Alabama, Florida, and Georgia as well as all over Texas and South America. Book a lesson today, if you are looking for a shooting system that is easy to learn and understand, makes self-correcting simple and instant, makes improvement steady and logical, and removes the mystery about the misses. Would you like to know what it really looks like to hit a 50-yard crosser consistently? Brian can show you what it looks like on his iPad in the OSP Knowledge Vault, and he can show you how you can be more consistent on all targets and have a steadily improving game that you are proud of, guaranteed!

Sign up for one of Brian's Houston clinics and OSP will pay for the targets, ammo, and lunch.